Hello and welcome back to the House of Zephyrus Hellenic Temple Blog! I know it has been a while since we updated – someday our temple resources will expand to the point where we can appoint someone as a secretary/social media coordinator or some such, so you can all stop relying on the person with the almost non-existent internet presence and the five-year-old phone to do these things…

However, I am pleased to announce the revival of this blog following the discussion held at our last Temple ritual – a celebration of the Athenian Demokratia festival. For those of you not able to join us, the Demokratia was an annual celebration, thanking the Gods – specifically Themis, Zeus, and Athena – for the gift of the system of democracy. 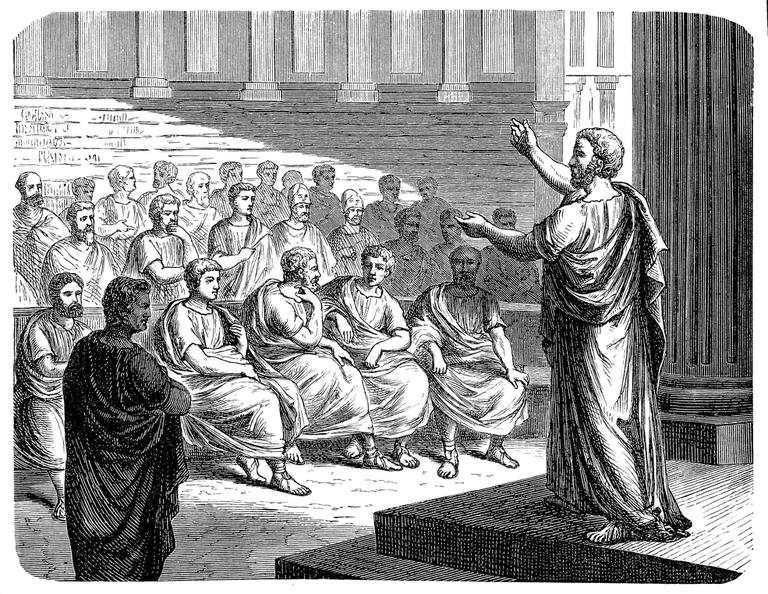 We are living in an interesting time for our own democracy. This ritual was planned several weeks ago and took place on Saturday September 21st, days before the impeachment inquiry into the current US POTUS was announced. Our ritual was obviously not conducted in response to this event, but if anything, it certainly makes this a good time to talk about why we, like many Hellenic polytheist groups in the US, are bringing this festival back.

Now, while Greek democracy wasn’t really all that democratic by our standards (the citizen body able to vote excluded women, slaves, non-Athenian-born residents…basically 85% of the population), the ideals of democracy – the rights of citizens to vote, the belief in the ability of the people to govern themselves – are part of the heritage passed down to us by the Greeks.

One important difference between democracy as we know it and democracy as the Greeks knew it was that the citizens did not vote for representatives to do the business of governing for them. Rather, they were expected to actually govern themselves. Citizens were chosen by lottery to serve in legislative and judiciary bodies for periods of one or more years.

So, kind of like jury duty, except YOU would be the judge, or a member of Congress, for a period of time.

What this system had going for it was that it was, quite literally, rule by the people – albeit only a small group of them. Today, with a representative democracy that has given rise to professional politicians and influential lobbyists of various stripes, many of us question the degree to which “the people” actually wield power.

Basically sums it up (sites.google.com)

The purpose of our Demokratia ritual was to open the floor to the members of the oikos who were present to discuss what power we have, as individuals and as a group, to impact how our larger community – our democracy – works. These are and will be important questions, regardless of how the next weeks play out in Washington.

We have several action items that I am very excited about, but the first thing we decided to tackle was the question of voting – one very simple way to exercise power, particularly at the local level. Here in Reno, and in Nevada, the difference of a few points can decide an election, and our votes definitely count.

However, the trouble with voting – for many people – is that they feel they do not know enough to make informed decisions. What are the issues? What are the sides of the argument, and how do we navigate them in an increasingly polarized and combative political climate? How do we know that the candidate, usually a total stranger, is someone we can trust to represent us?

These questions can be paralyzing – we don’t know, so we don’t vote. But in doing that, we give up part of our power to be active creators in our community. Which bring me to the reason for this post. In our oikos Assembly, we decided that this blog would be an excellent place to gather information about elections, ballot measures, and candidates, in a calm and respectful environment.

The purpose of the posts that will follow this one is, first and foremost, information. The idea is to provide data so that we can alI make our own decisions. I, personally, do not want to tell people who to support or how to vote.

However, I am also not going to present an illusion of complete objective neutrality. In the first place, I obviously have my own opinions (and I hope you all do too!), and in the second place, we are a Hellenic polytheistic community. We have chosen to operate according to certain maxims and standards of behavior. There are some issues and some political figures that either do or do not support these maxims, and I won’t pretend otherwise.

One of the things that we want to do moving forward is to create space for members of the temple to present their own views. If you have strong feelings on a particular issue of the day, tell us about it. If you feel supporting a particular cause or candidate is in alignment with the goals of our temple, tell us why. As long as the discussion is respectful and follows the Reno Magick Codes of Conduct, I think that is great. More on that later.

Other action items to come:

For now, I will be managing this blog directly, until someone more capable decides to take it off me 🙂 If there is information anyone wants to share, please send it to me at alain.heiros@gmail.com.